How To Train Your Dragon

n.b., this review was written January 23, 2011 – before the Academy Awards nominations were announced.

As a coming of age, changing the world-view type movie, How To… works, mostly. It’s a familiar story, and yet one that is told with freshness, earnestness, energy and joy. That I’ve seen the basic elements in this movie before doesn’t bother me – there’s nothing new under the sun, right? The basic truths were explored faithfully, and the movie is definitely a worthy addition to the pantheon of great movies of 201o.

Long ago up North on the Island of Berk, the young Viking, Hiccup, wants to join his town’s fight against the dragons that continually raid their town. However, his macho father and village leader, Stoik the Vast, will not allow his small, clumsy, but inventive son to do so. Regardless, Hiccup ventures out into battle and downs a mysterious Night Fury dragon with his invention, but can’t bring himself to kill it. Instead, Hiccup and the dragon, whom he dubs Toothless, begin a friendship that would open up both their worlds as the observant boy learns that his people have misjudged the species. But even as the two each take flight in their own way, they find that they must fight the destructive ignorance plaguing their world. Written by Kenneth Chisholm (kchishol@rogers.com)

How To… was fantastic, visually. The animated aerial sequences were engaging and engrossing, and overall this is definitely one of the better films of the year.

Notice that I didn’t say better *animated* films? I say that because, again, this year, the animated films are excelling at hitting the classic elements of story, and even what appears to be a minor entry in the realm of great films of 2010 nevertheless stands out because it tells a story. A story! Sorry, Black Swan, that seems to be something you forgot to include.

Sweet story. Has all the classic elements of a timeless tale: protagonist, antagonists, story arc, character arcs, conflict, climax, resolution. Sadly, elements which are missing in most modern movies.

The strength of How To… is clearly with the animation. With dazzling aerial and ground-based battle sequences, as well as intimate, personal scenes, the animators immerse the viewer in the Viking world, and do so completely. Was new animated-ground broken with this movie? I don’t think so, but everything that is currently known and done was employed to dazzling effect. 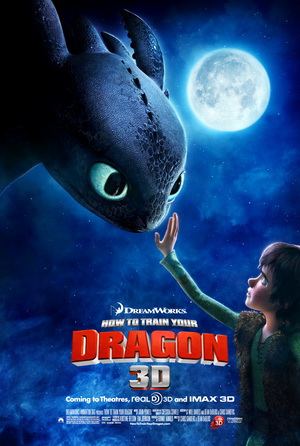 One Response to How To Train Your Dragon